Laser light in action at Poto

The word “light” has many definitions; the foremost being, “something that makes vision possible.” Arguably, second to that, would be, “electromagnetic radiation of any wavelength that travels in a vacuum with a speed of 299,792,458 meters per second; specifically: such radiation that is visible to the human eye.”[1] Today, one might find any number of ways to define the term. Depending on the context in which one speaks of it, light could be a generated super power for the digital manufacturing trade or a natural element harnessed throughout every culture in the world.

This May 16th marks The United Nations Educational, Scientific and Cultural Organization’s (UNESCO) first ever International Day of Light[2]. May 16th is the chosen date, as it marks the anniversary of the first successful operation of the laser in 1960 by physicist and engineer Theodore Maiman. The importance of declaring a day to appreciate light may seem celebratory, but in fact it spurs engineers, scientists, artists, community organizers, environmentalists, doctors, teachers (and so on…) to share how important light is to them in their field. 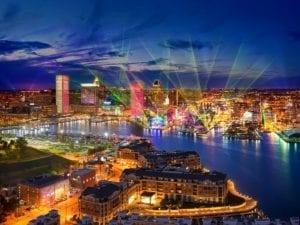 Near to Potomac, Baltimore City just ended its weeklong celebration of light during its Light City Festival. Hundreds of artists exhibited works that centered around light as a medium, including UMBCs own Kelley Bell[3]. Many of the works utilized technology such as solar panels to power their display or conceptualize their works further.

At Potomac, we harness light’s abilities in digital manufacturing every day. Whether it be cutting microscopic designs in materials such as polymer film, glass, and silicone, or our more recent adventures in welding plastics[4]. Regardless of its beautiful ambiguity, we at Potomac agree whole-heartedly that light enables the visions of our customers! We look forward to celebrating such a diverse element, as well as continuing to cherish it in our daily practice.